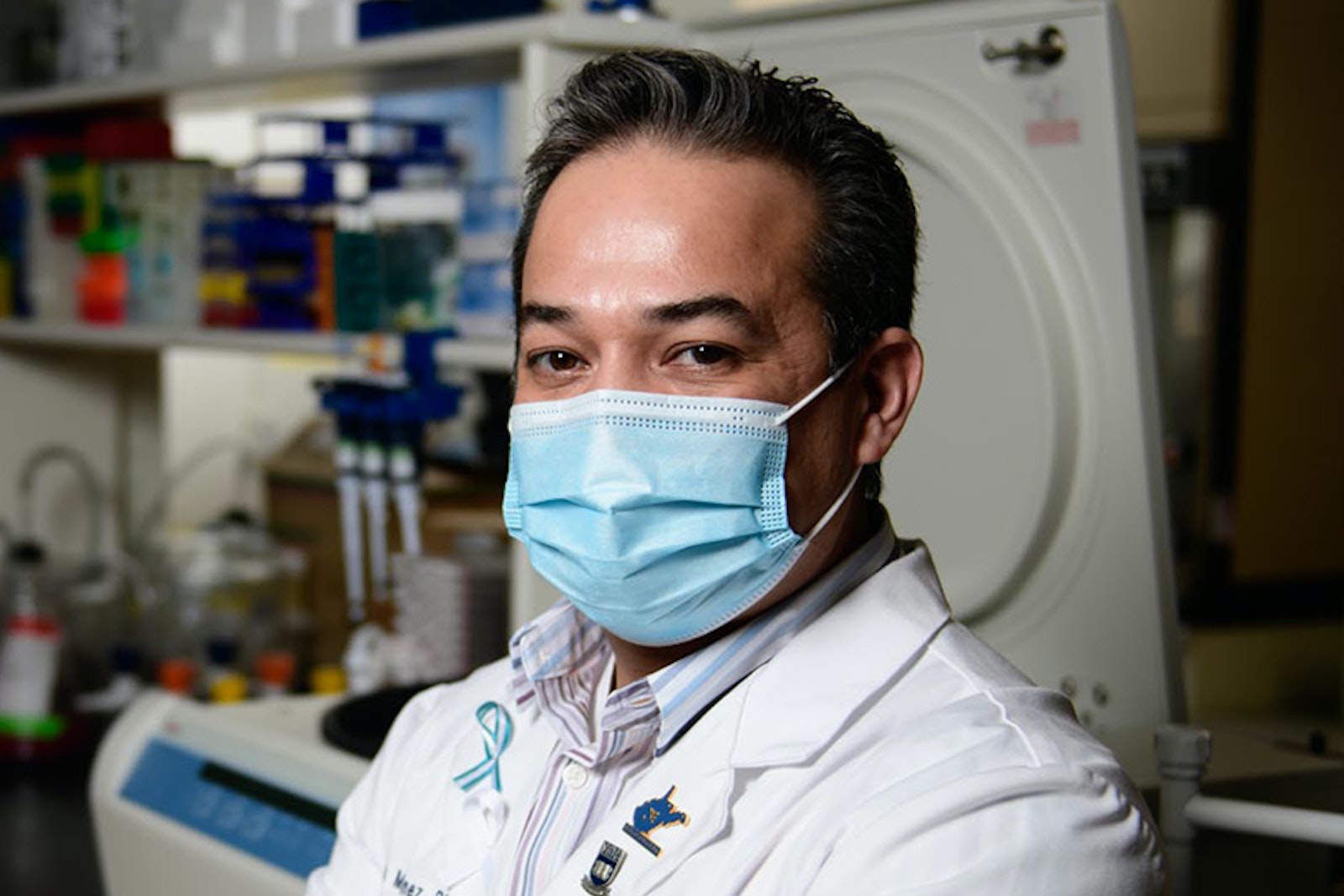 The science behind the COVID-19 vaccine has the potential to do more than prevent cases of COVID-19 itself. In the coming years, it could also help doctors treat stubborn forms of cancer.

West Virginia University researcher Ivan Martinez, PhD, is investigating how RNA — a diverse class of molecules that includes those in the COVID-19 vaccine — can influence lung cancer’s response to radiation therapy. In a new study, he found that an abundance of one type of RNA was associated with better radiation sensitivity.

“We live in an RNA world,” said Martinez, an associate professor in the WVU School of Medicine and WVU Cancer Institute. “The more we understand these RNAs, the more I think we’re going to find better diagnostic therapeutics for cancer and, really, any human disease. The most obvious example that we have right now is RNA vaccines. RNA came and saved the world.”

‘I never saw something so black and white’

In a new study — published in Cancer Research — he and his colleagues analyzed a human lung-cancer cell line after it was radiated in a way that simulates what a lung cancer patient undergoes. Then they analyzed how the cells’ RNA behaved.

They paid special attention to which types of RNA the cells’ DNA transcribed. Did certain varieties unspool from the DNA strands more frequently than others did? How long were they? Where on the strand did they originate?

The researchers discovered that after radiation, the DNA started to churn out long non-coding RNAs from a family called long non-coding RNAs, or “lncRNAs.” When the team looked more closely, they pinpointed the RNA’s point of origin: the Y chromosome.

“This is very interesting because it means that only male patients have this,” Martinez said. “And we were very lucky because when we radiated that cell line, we didn’t know it was a cell line that came from a male patient.”

The researchers radiated all of them and observed what happened to the lncRNAs. The results, Martinez said, were “striking.”

“The more we radiated the sensitive cell lines, the more the expression of these lncRNAs went up,” he said. “It’s called dose-dependent expression. But when we did the same thing with radiation-resistant cells, this lncRNA expression was dead. Gone. There was nothing there. In the decades of my career, I never saw something so black and white.”

Have you seen this chromosome?

Intrigued, Martinez and his colleagues dove into the scientific literature on the subject. They found that since the 1990s, researchers had known that some tumors in males had a tendency to lose their Y chromosomes. This trend held true across a range of cancers, from prostate cancer to leukemia.

“So, we looked for the Y chromosome in this group of cell lines where the expression of the lncRNAs was dead,” Martinez said. “And they didn’t have it. All of them lost it. We were like, ‘Oh, that’s very cool,’ because that means that maybe there’s something related to radiation resistance and losing your Y chromosome.”

To find out what that “something” might be, the team isolated the cell lines that were sensitive to radiation and artificially reduced their expression of lncRNAs.

“It turns out, the moment we knocked down the expression of these lncRNAs, the cells became more resistant to radiation,” Martinez said.

Conversely, when the team took radiation-resistant cells and restored a fragment of the Y chromosomes they had previously lost, the cells responded better to radiation therapy.

These insights may improve how doctors treat lung cancer in the future. For example, if a lung-cancer sample taken from a male patient still has a lot of Y chromosomes in it, his doctor may decide to proceed with radiation. If, however, the Y chromosomes are absent, she may choose another treatment.

“But I also see this from a mechanistic perspective,” Martinez said. “What exactly is this lncRNA doing? What is it binding to? What is it interacting with to help the cell to be more sensitive to radiation? We have some clues, but we don’t know yet in detail. My idea is that if we identify what exactly it’s doing, we can artificially put that in cells that are resistant and use it as a therapeutic.”

Martinez doesn’t think these therapeutics will stop with lung cancer – or even with cancer in general. We live, after all, in an RNA world now. And what we have yet to learn about RNA dwarfs what we do know.

“Around 85 percent to 90 percent of our DNA becomes RNA,” Martinez said. “How much of that RNA is translated to proteins? Just 2 percent. So we have a universe of RNAs in our cells that don’t translate to proteins. Scientists call them the ‘black matter of biology’ because we know it’s there, but we don’t know what it is. If you want to cure a disease and you’re only looking at 2 percent of the whole picture, you’re never going to get there.”